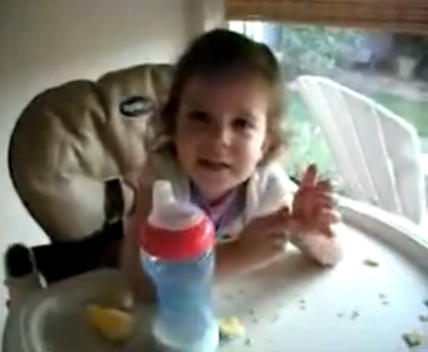 Before I analyze this  video I need to address some issues about  professionalism and speculation and my blog. The body language analyses I make in these blog is based on my background, research,  education, and close to three decades of  experience and knowledge,  which allow me to render certain opinions about how I see certain body language and communication behaviors.

Blogs are a reflection of one’s opinion where editorializing is accepted and the norm. Even  scientific journal articles  involve speculation regarding proven or unproven theories. So for those of you who write to me I can assure you that I will  continue to share my opinions and thoughts  in these blogs as well as providing you with  my knowledge concerning  objective data that I observe.

The first editorial comment I will make with regard to this video is that it  made me terribly sad. In fact, it  brought tears to my eyes and left me with  a sick feeling in my stomach and a heaviness in my heart as I saw how this poor child was neglected both verbally and emotionally.

Having spent the early part of my career studying speech and language development, it is essential for anyone interacting with a child to verbalize  with them. That is how a child develops their  speech an language skills.

In Cayleey’s case Casey does not interact with her. She does not respond to Caylee’s singing or verbalizing. Instead, she continues to shoot a video, observing her like one would observe a  zoo animal. It sickened me.

What shocked me even more was that the only time Casey interacted with Caylee, she  uttered  two words as if to question what Caylee said. She questioned whether her child was saying the words ” “I kill? ” I could not believe my ears!

Caylee had emotional needs in this video that  were clearly  not being met .  These needs were ignored.  To me that is cruel and abusive.

As you will see in my analysis and in looking at the video, Caylee wanted affection and verbal  interaction. She wanted love. She wanted to be picked up, especially at the end of the video as you will see. But she was completely ignored .This behavior on Casey’s part was sadistic in my view. It was obviously of preview of  horrible things to come.

For  those of you who write to me to simply be contentious or to tell me that you know more, or to stick up for Caysey saying that photos exist  showing Casey smiling with Caylee or Caylee reaching out to her mother,  I say look closer. There are a lot of ” tells” which show that Caylee was hungry for Casey’s love and it was not reciprocated.

Often it is not just the fact that someone is smiling in a photo that determines whether they are happy inside or not. One has to look at subtle body language tells from facial nuances to body positioning and body language behaviors.

I am sure that watching this  video will clear up your concerns once and for all as to whether you think Casey was a good and loving mother to Caylee. After watching this sickening video I don’t believe she was a loving mother . A loving and caring mother verbalizes and interacts with their child. They do not ignore a child  as you will see by clicking the link below .

If you look at the first photo above, you will see that Caylee begins to have a frustrated concerned  look on her face as she is sitting in her high chair with individual pieces of cereal spead out , along with her  her baby bottle. She is verbalizing and singing. She verbalizes and sings  what sound like “Ah keyeh”

Since the /s/ sounds aren’t yet formed in a child of that age, it may be her attempt to say “ A kiss” Maybe she is asking Casey, who is filming this video for a kiss to reassure her that she is loved.  In the photo above you see the beginnings of  her frustration and tenseness by her  little furrowed brow as she is ignored by Casey.

This continues to be   upsetting to her as you can see from her facial expression while she continues to sing and is ignored. Now you can actually see sadness in her downturned eyes and corners of her mouth. She even physically backs away  leaning back into her high chair to further show her displeasure.

Now Caylee is very upset as she leaks out the facial expression indicating that she is about to cry. She even curls in her lower lip. Look at her sad  eyes . She tries to communicate that she wants a response as she raises her hand and points her finger.

Now Caylee is even more frustrated as she reaches out with her arm indicating that she desires a response and some love and attention. It is also a gesture that she wants physical attention  like a hug or some physical contact.

She is not getting any attention from Casey ,so she makes direct eye contact with Casey and continues to sing even louder as she increases the volume of her song. But Casey continues to ignore her.

Caylee sings and now eats and raises her hand to be acknowledged. But she is ignored The significant thing about this screen shot is that she leaked out her anger at being ignored  as you can see in the fist like position of her hand. 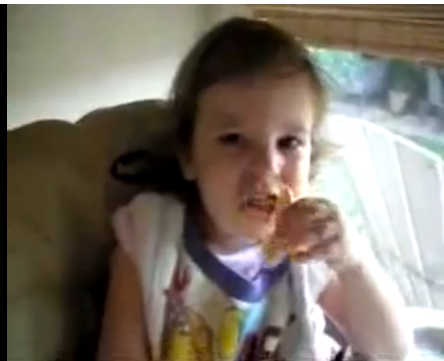 Around 33 seconds into this video  Casey zooms in  as you can see  above and you hear her ask in a questioning tone utttering the words  “I Kill? It is shocking. Caylee has been singing  ” Ah kee” over  and over again, which most would perceive as Caylee trying to say  “A kiss.” indicating that she wanted attention  nd affection. But  Casey questions if little Caylee is saying “I kill”

What normal mother would think that her baby was talking about killing? A child that age is innocent and pure and has no concept of death and evil and killing. In addition, the / l /sound at the final place in a word  isn’t developed at that age.

Caylee is so thrilled that Casey finally interacted with her and uttered  something to her, even though she doesn’t understand what Casey actually  said, she continues to loudly and vigorously  repeat the sound ” kee, kee, kee,”  three times while continuing  to chew on her cookie. 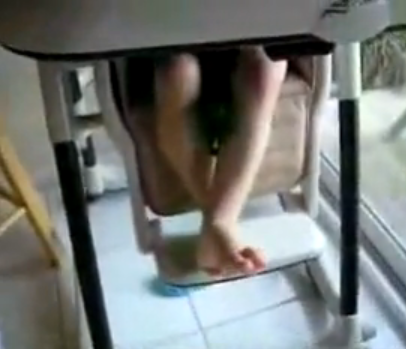 There is now complete silence on Casey’s part, after Caylee  responds by speaking and singing. The silence continues as  Caylee continues  to be filmed  and observed like a zoo animal.  There is no interaction.  Nothing is said by Casey. There only filming. It is disturbing and upsetting to hear the length of time that the complete silence took place  from  52 to 1: 29 .

Then the most bizarre thing happens.  Casey films Cayee’s legs  from 1:30 to 2:32 where there is continued silence.

She films Caylee under the table and now shoots a close up of  Caylee’r crotch area. The implications are highly disturbing.  Why would anyone video their child’s crotch area?

It certainly makes one wonder of there were any sexual issues or concerns involved here. I am not accusing Casey of sexually molesting Caylee. I am just staying that this behavior is odd and raises some concerns. It is not typical behavior.

For the first time, we see Caylee smile a genuine smile as she thinks that this may be some sort of a game. 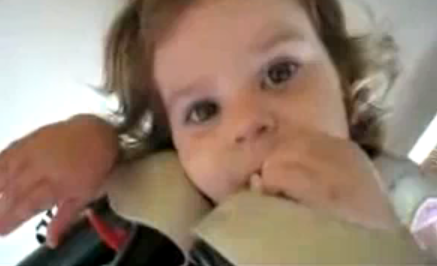 But then she quickly realizes that it is not a game. She stops smiling and continues chewing her cookie as she looks directly into the camera. 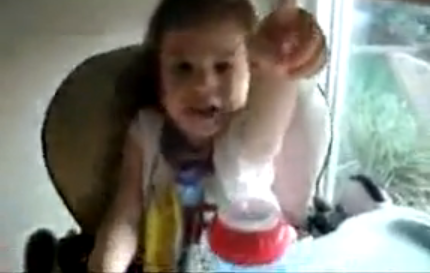 Caylee is hungry for some type of verbal interaction after so many minutes of silence. She verbalizes and raises her hand and points to Casey as to indicate that she wants Casey to speak and interact with her. 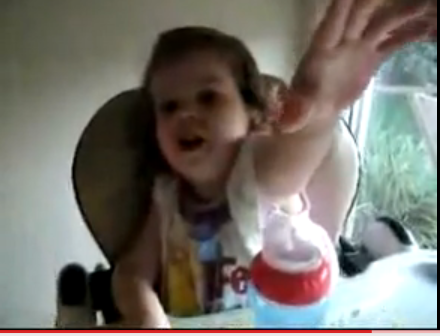 Now you see Caylee is getting very frustrated . She verbalizes “Dek yoo.” which may mean that she is trying to say Thank you as a further attempt to indicate that she wants Casey’s attention.  Look at how she stretches out her little body in an attempt to literally reach out to Casey. Her eyes are opened wide  and her hand is open to signifying a welcoming  gesture towards Casey. 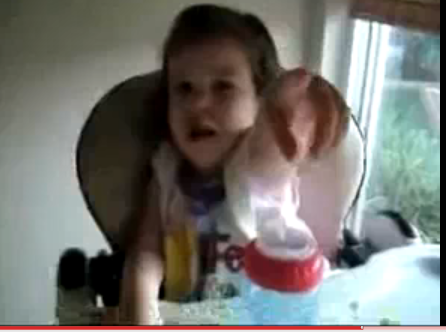 Now her open little hand turns into a pointing gesture where she is in essence saying ” You, mommy, pay attention to me and interact with me.” You can even see the frustration starting to build in Casey’s face. Her eyes begin to turn downward and her mouth does the same. She looks terribly sad as though she is about to cry.

Caylee quickly  sees that reaching out doesn’t seem to work in terms of  getting mommy’s attention. So she thinks that maybe singing will do the trick. She  proceeds to sing    di di doo di di duh  and changes into another tone of  dee de da de de goh. She looks directly at Casey and is wide eyed as we see in the above screen shot.

Singing hasn’t worked in securing Casey’s attention either. So she throws up both hands which indicate that she wants to be picked up. What is terribly sad is that Caylee leaves her hands up in that position for several seconds  to no avail.

One can only wonder how long Caylee remained uncomfortably in that high  chair. The bottom line is that to not speak to your child when they verbalize and gesture for you to interact with them is inhumane. www.drlillianglass.com